Eggnog is a popular drink during the winter season throughout the United States and Canada. For many of us, it is associated with winter celebrations such as Thanksgiving or Christmas. It’s a sweet, dairy-based drink made out of milk or cream, beaten eggs, sugar and liquor. Brandy or whiskey can be used, but the most popular choice is rum. 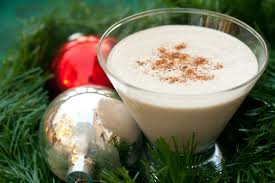 But where does it come from? There are debates about the origins of Eggnog. It may come from East Anglia, England, where it was enjoyed by aristocrats around the 16th century. Another story tells us that it comes from a medieval European beverage made out of milk which was called posset.

The origin of the word nog is also debated. It might come from the work noggin, which is a Middle English term to describe a wooden mug to serve alcohol. Another story is that the original name was egg and grog, then shortened to egg’n’grog and then to eggnog.

The drink apparently came across the Atlantic Ocean in the 18th century and landed in the English colonies. Since rum was rare in war times, brandy or bourbon was a popular substitute.

Here is an easy recipe for your home made Christmas Eggnog: